Staff at a North East storage container hirer honoured Remembrance Day in an artistic fashion in 2020 – with a mural painted on the side of a 20ft unit.

Two members of the team at Mobile Mini UK’s Sunderland branch, based at North Hylton Enterprise Park, hand painted the mural on the side of a 20ft storage container to honour those who fought in the First and Second World Wars. 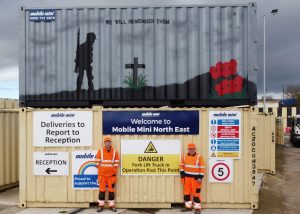 Yard foreman John Eunson and yard operative Connor Vernon dedicated their own time to painting the unit, which can be viewed from North Hylton Road by passers-by, before unveiling it to the rest of the team.

Office manager Holly Waites said: “We’ve always had an inkling about John and Connor’s artistic skills but when we saw this container, we were absolutely speechless. It exceeded all of our expectations.”

The idea was inspired by Sunderland branch manager Tim Mackay, who asked John and Connor to lend their talents. Tim said: “Each year we place poppies and Remembrance stickers on company vehicles, but we really wanted to go above and beyond this year, especially in light of the 75th anniversary of VE Day.

“Most of the team have relations who fought in past wars and conflicts which we are all tremendously proud of. Our internal sales executive, James Patrick, also served as a medic in the Royal Navy for 12 years, completing two tours in Afghanistan. These people sacrificed so much for us to be where we are today, and we wanted to truly honour them and pay our respects.”

The mural will remain in the Sunderland depot for customers and members of the public to view.

Mobile Mini UK currently employs 20 ex-military personnel across its 15 nationwide branches, offering each an additional day’s holiday each year to recognise the dedication given during service with the forces.

How we Adapted to the Evolving & Ever-Changing Covid Risk Landscape

Our container hire service provides an inexpensive solution to your storage problems. With the largest fleet of containers in the UK, as well as our own fleet of delivery vehicles, we can provide you with the perfect storage solution, delivered to your chosen location nationally.

Our secure and portable accommodation units, available in two ranges; Anti-Vandal Range and Energy Saving Range, offer on-site facilities, from office and canteens, to drying rooms and toilets, come in a variety of sizes and layouts, to service all your requirements.

Mobile Mini Plus is an extension of our Mobile Mini product offering providing equipment such as; generators, site lighting and water bowsers. To ensure that our valued customers receive the same great customer experience through cross hire we select only the very best suppliers who align with our focus for customer care and pricing.

Please choose a product and enter your contact details here to request a quote.

Good communication, and they stick to what they say and everything is done professionally.

The quality of the units is guaranteed, no issues at all with the units and Mobile Mini are always prompt

Their flexibility is good, they bent over backwards to get units to site at short notice. The paperwork was dealt with instantly and the units are clean and extremely well priced.

Great communication, a great company to deal with.